One great excursion into the Frontierland of Disneyland Park takes us out on open waters—OK, maybe not-so-open waters—aboard a full-scale replica of the first American vessel to circumnavigate the globe.

The original Columbia Rediviva left Boston Harbor in 1787 to “carry the Stars and Stripes around the World.” It returned to port after three years, charting 41,899 nautical miles. The ship made two voyages to the Pacific Northwest under the command of Captain Robert Gray, on mission to barter manufactured goods for sea otter pelts. Those, in turn, would be traded across the ocean in China for silk, spices, tea, and porcelain.

In the spring of 1792, Gray took the Columbia across the bar and entered “a large river of fresh water, up which we steered.” There they discovered very civil native tribes, collecting nearly 1,000 otter, beaver, and other furs he then sold to China for $21,404.00. (This large river was named after the ship, being called “Columbia’s River,” and eventually the Columbia River.) 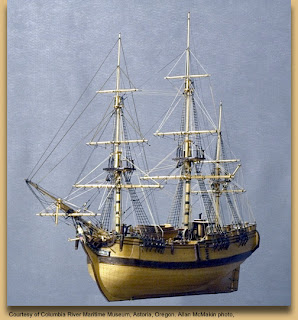 *Photo and information via LewisandClark.org.

Disneyland’s Columbia is not in the business of fur trading, although it does journey past a beaver dam in progress and a Native American village on the banks of the Rivers of America. However, the vessel is a fine example of Imagineer devotion to accuracy of design. Just as Disney Cruise Line’s fleet reflects the splendor of majestic predecessors, Columbia replicates its namesake with impeccable authenticity. A little imagination combined with historical records, as maritime expert Ray Wallace recreated the ship’s blueprints based on a single surviving sketch of the ship. Admiral Joe Fowler directed the design, and the Columbia Rediviva was once again revived! Disneyland’s Sailing Ship Columbia launched in June 1958. While the original Columbia took 3 years to sail around the world, your voyage will only take about 15 minutes.

The Sailing Ship Columbia sails only during daylight hours, taking Guests full-circle along the Rivers of America, around Pirate’s Lair on Tom Sawyer Island. On the journey, you will see sights and sounds of 3 different lands—Frontierland, New Orleans Square, and Critter Country–including a rustic frontier cabin, a Native American village, beavers building a dam, moose munching lunch, the ominous Haunted Mansion, a skunk-raccoon standoff, sunning mountain lions, an osprey guarding its nest, and the Disneyland Railroad chugging along its tracks.

Today’s Takeaway:
Captain Gray and his crew bartered with the Native Americans. Simply put, they exchanged goods without exchanging money. This system worked well in the past when there existed no inter-cultural monetary equivalent. To obtain goods or services from a merchant, the purchaser would trade an item of similar value. Modern currency has long since replaced the barter system in most established cultures. Bartering still occurs, but not in the large-scale market system.

Establish a bartering system in your home. What goods and/or services can be exchanged? For example, can your teenager weed the garden in exchange for a trip to the movies with a friend? Have your students chart a list of goods and/or services and assign a fair value to each. Apply the barter system to the listed items for one month. Is this system fair? Is it effective? Is it efficient?

For more insight into modern methods of bartering, see the BarterQuest blog.

#didyouknow The most famous Muppet bike ride may b

Are you at a crossroad? I suggest following the se

This website uses cookies to improve your experience while you navigate through the website. Out of these, the cookies that are categorized as necessary are stored on your browser as they are essential for the working of basic functionalities of the website. We also use third-party cookies that help us analyze and understand how you use this website. These cookies will be stored in your browser only with your consent. You also have the option to opt-out of these cookies. But opting out of some of these cookies may affect your browsing experience.
Necessary Always Enabled

Any cookies that may not be particularly necessary for the website to function and is used specifically to collect user personal data via analytics, ads, other embedded contents are termed as non-necessary cookies. It is mandatory to procure user consent prior to running these cookies on your website.

SAVE & ACCEPT
Send this to a friend