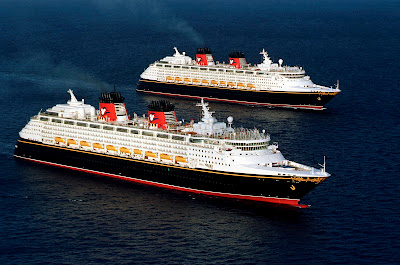 Soon four sleek ships will sail under the Disney banner. The Magic, which set sail in 1998, and its sister ship the Wonder, which launched a year later, have made travelers’ cruising dreams come true for many years. Last year, their “little” sister, the Dream, made her debut in January 2011 with a star-studded christening celebration and mini-cruise. Next month, the fleet will be complete when the Fantasy crosses the open waters of the Atlantic Ocean, sights set on New York City.

The Disney Magic will depart New York City from May through September, destined for either the Bahamas or Canadian ports-of-call. From September 22 through the
beginning of December, it will sail from Galveston to the
Western Caribbean.

From May through August, the Disney Wonder will venture from Seattle to Alaska. For much of the year, it will also depart Los Angeles for destinations along the Pacific Coast,
the Mexican Riviera and for the first time, Hawaii.

The Disney Dream will continue to sail a variety of Caribbean and Bahamian itineraries departing its home dock of Port Canaveral, and on March 31, 2012, the brand new
Disney Fantasy will take its maiden voyage, sailing also from
Port Canaveral, and destined for Disney’s private island,
Castaway Cay, the Bahamas and the Caribbean.

Next year will bring the Disney fleet a new Miami, Florida, homeport and will offer new European destinations aboard the Disney Magic, such as Venice, Italy; Croatia’s Dalmatian Coast; Ephesus, Turkey; and the Greek Isles. Disney Cruise Line and Adventures by Disney will also offer families unique land and sea experiences in the Mediterranean.

Today’s Takeaway:
The Gulf Stream is the oceanic current that flows along the Atlantic coast of the United States, beginning in the Caribbean and carrying warm waters northward, eventually making the waters of northwest Europe more tepid than those of other regions at the same latitude. (To read more about the Gulf Stream, visit CIMAS.) Similarly, the California Current flows southward from British Columbia, keeping Hawaii cooler than other land masses at its latitude. (For more on the California Current, visit NOAA.)

Follow this Science Buddies experiment to replicate ocean currents using common household items in your kitchen: “The objective of this ocean science fair project is to make a model of ocean currents and measure how the heat input affects velocity of the currents.”