December brought us holiday spectacles and celebrations. We wished for the perfect Disney gift aboard Magical Blogorail Yellow, then focused our attention on the Disney Parks at Christmas time.

Our very special Guest Amanda of Mouze Kateerz kicked off the holiday season with a look at Downtown Disney festivities.

Decorations may be lower scale at Animal Kingdom out of consideration for the Park’s inhabitants, but holiday magic is evident!

Special Guest Mike of My Dreams of Disney helped us explore Epcot at Christmas.

We had the Happiest Christmas on Earth at Disneyland Park! We also got California Adventure-some.

And though the holiday has concluded, we continued to DREAM of Christmas aboard Disney Cruise Line. 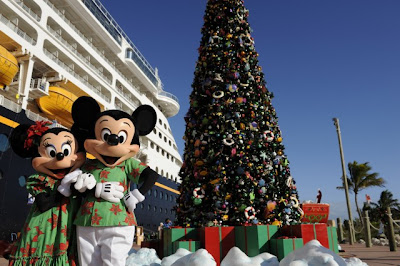 Of course, our regular Tiggerific Tuesday, Wordless Wednesday and GIVEAWAY Wednesday features ran as usual, but Earn Your E.A.R.S. took the month off.

Today’s Takeaway:
If you missed any posts over the past year, take some time to read through a few. We’d love to know what you love about us and even what you’d like to see improved, so please be sure to leave a comment below or email jodi (at) magicalmouseschoolhouse (dot) com.

Your only other assignment is to jump into 2012 with us! We’d love to mark you present on the roll. Please follow us on Google Friend Connect, Networked Blogs, Twitter or Facebook. You can also subscribe to our feed or by email subscription.

What will you see in the new year? Well…January will take us across the Pacific to Disneyland Hong Kong and Tokyo Disney Resort. We’ll sail back to the States aboard Disney Cruise Line throughout February, then hop over to Disneyland Resort Paris during March, leading up to its 20th Anniversary. We’ll be sure to spotlight the maiden voyage of DCL’s newest fleet member, the Disney FANTASY, on March 31st. Then, we’ll hit Epcot a little earlier that we usually do and take a look at the International Flower and Garden Festival in April. Gonna keep you in suspense for the rest!

We’re so glad you’ve joined us, and we hope you’re having a great time learning while you play where Disney IS school!