What a way to welcome fall! We have spent this past month checking out Disney’s Hollywood Studios at Walt Disney World Resort.

“Welcome to Hollywood!” Since opening day in 1989 at Disney’s Hollywood Studios (then Disney-MGM Studios), a cast of living characters has greeted, entertained and interacted with Guests as they walk along Hollywood and Sunset Boulevards. Citizens of Hollywood, aka Streetmosphere, are some of our favorite people to hang out with when we visit the World.

Young Padawans get a chance to battle Darth Vader when they go through the Jedi Training Academy at Disney’s Hollywood Studios. Your child (age 4 to 12) can become a junior Jedi Knight! 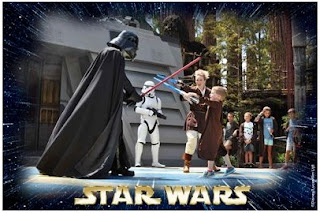 Star Tours: The Adventure Continues opened on May 20th of this year after months of being reimagined. The new and improved ride now features 54 ride sequences, offering motion-simulated 3D journeys through a wide variety of settings and story lines.

Pump up the adrenaline with a loop or two (or three or four) on one of my favorite attractions, the Rock-n-Roller Coaster Starring Aerosmith. Each “car” pumps 32,000 watts of onboard audio through a 125 speaker, 24 sub-woofer sound system and accelerates from zero to 60 mph in 2.8 seconds with the force of a supersonic F-14 jet airplane.

Disney’s Hollywood Studios brings the magic of the movies to life. The Indiana Jones Epic Stunt Spectacular! is a 30-minute live show performed in a covered, outdoor theater. The performance showcases the stunt person’s craft and lets Guests in on the action, demonstrating techniques behind the stunning feats seen in the Indiana Jones films.

“It’s time to play the music! It’s time to light the lights! It’s time to meet the Muppets in the Muppet Show tonight!” With a new Muppets movie about to hit theaters across the country (November 23rd), there’s no better time than now to check out the Muppet Vision 3D show at Disney’s Hollywood Studios.

We featured some very special Guests this month too:
Ken Brown wrote of the special tribute to “the Man behind the Mouse,” in his article about Walt Disney: One Man’s Dream. When this attraction opened at Disney’s Hollywood Studios (back then called Disney – MGM Studios) there were an awful lot of us who said, “It’s about time!!” A tribute to the man responsible for everything we all enjoy was long overdue and, as is normal for all things Disney, is beautifully done. 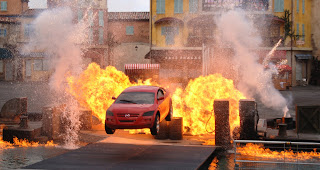 We hopped aboard Magical Blogorail Yellow and discussed some fun things to do at Walt Disney World in the Fall. One FREE event that’s a big hit with Resort Guests and locals alike is the annual Festival of the Masters (coming soon, November 11-13, 2011). Now in its 36th season, this year’s open-air festival promises nearly 150 award-winning artists, showcasing a spectrum of talent in all sorts of visual arts mediums. We also featured fellow Magical Blogorailers on Fridays the Yellow loop doesn’t run.

Several of us Magical Blogorail members are hosting a virtual Food & Wine blog carnival! The party continues until the Festival ends, so circumnavigate the World Showcase with us to get a literal taste of the 11 nations featured at Epcot’s permanent Pavilions and much, much more.

Of course, we’ve hosted our weekly Tiggerific Tuesday! Blog Hop…or Bounce! as well as Wordless Wednesday and bi-weekly GIVEAWAY Wednesdays too. In fact, We’ve given away a lot of prizes this month, with one more to be announced later on this morning. The Children’s Art Contest sponsored by Folio Academy has been running all month long. You guys have some very talented kiddos!

Earn Your EARS has been a big hit this month too. Participants, please remember to turn in your assignments today if you have not already done so. Registration for November opens tomorrow, and a new lesson will be sent out by tomorrow evening.

I sure hope you’ve enjoyed our October offerings! November will focus on Disney’s Animal Kingdom, and then December will begin our annual look at the holidays at Disney Parks. See ya real soon!

Today’s Takeaway:
Take some time to look back at this month’s articles. Catch up on the ones you missed or enjoy a second (or third or fourth) reading of your favorites.

OMGSH!!! Festival of the Arts starts this Friday!

We were excited to see the elusive Mechanicus Truc

When the fishing app says today is a 7, but these

Thanks for your support this year! We appreciate y

This website uses cookies to improve your experience while you navigate through the website. Out of these, the cookies that are categorized as necessary are stored on your browser as they are essential for the working of basic functionalities of the website. We also use third-party cookies that help us analyze and understand how you use this website. These cookies will be stored in your browser only with your consent. You also have the option to opt-out of these cookies. But opting out of some of these cookies may affect your browsing experience.
Necessary Always Enabled
Necessary cookies are absolutely essential for the website to function properly. This category only includes cookies that ensures basic functionalities and security features of the website. These cookies do not store any personal information.
Non-necessary
Any cookies that may not be particularly necessary for the website to function and is used specifically to collect user personal data via analytics, ads, other embedded contents are termed as non-necessary cookies. It is mandatory to procure user consent prior to running these cookies on your website.
SAVE & ACCEPT
Send this to a friend