The same week Disney Cruise Line christened the Dream, its older sibling celebrated a new adventure of its own. The Disney Wonder, second “born” of this fleet family, headed West, through the Panama Canal to the Mexican Riviera, Los Angeles, and ultimately the Alaskan coast.

The Wonder has 10 massive decks covering a total length of 964 feet, a maximum width of 106 feet and a gross tonnage of 83,000. It can comfortably accommodate 2,400 passengers in addition to its 945 Cast and Crew Members who cater to Guests’ every need. The Wonder’s elegance evokes a “nostalgic glamour—a vessel that paid homage to a time when ocean liners inspired awe and represented the very best in artistry and architecture.” Constructed with families in mind, this beauty is distinguished for both its sophisticated design and its sleek fun. There’s something to suit everyone’s taste, from supervised children’s and youth activity centers to family pools and parties to adult-only restaurants and lounges.

The 2011 season finds the Disney Wonder in new waters. For the first time ever, DCL will sail to Alaska. A total of 18 seven-night cruises are booking now, departing from Vancouver, British Columbia, between May 3 and August 30, 2011, and passing through Tracy Arm, Skagway, Juneau, and Ketchikan. While in dry dock this past October, the Wonder underwent some enhancements, adding a 2,500-square-foot Outlook Café to Deck 10. This new venue features floor-to-ceiling, curved glass windows offering breathtaking vistas of Alaska’s scenic shores. A spiral staircase connects to the Cove Café one deck below.

Book-ending the Alaskan voyages are seven-night sailings and one ten-night trip through the Mexican Riviera, cruising ports of call at Cabo San Lucas, Manzanillo, Mazatlan, and Puerto Vallarta.

[NOTE: For most sailings from May 3 to June 7, 2011, (United States and Canadian resident) kids 17 and under sail free on select cruises to Alaska when traveling with 2 full-fare guests in the same Verandah or Oceanview stateroom.] 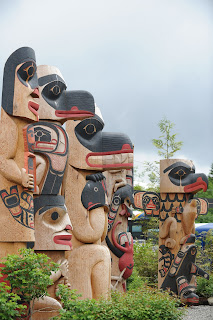 Guests who take shore excursions on the Wonder’s Alaskan cruise will likely see hand carved totem poles in areas of native populations. Totems are large wooden pillars of carved animal, plant, or other natural objects stacked atop each other. They tell the story of a certain tribal or traditional people, with each emblem representing a clan or family. While totem poles are not worshipped, the featured images are sometimes revered as the clan’s founder, ancestor, or guardian.

Totem poles can convey a wide range of meanings, and contrary to popular belief, do not necessarily have a set order. Many feature the most important figure on the bottom, but totem meanings are as varied as the artists who build them, and each is unique. Oftentimes, several are grouped together to communicate a progression of time or events significant to the clan.

Using artist clay or Play Doh and moldings, create a totem pole representing your family heritage. Assign each family member a particular animal or other representation and arrange them atop one another as a visual reminder of a favorite memory. You may need to use toothpicks to secure each figure.