We celebrated our 1st Birthday this month! Thanks so much to all who joined in the celebration! We Guest posted here, participated in the Dismarks Disney blog carnival here, Guest hosted a blog hop, and joined the Magical Blograil Yellow loop. We also gave away lots of gifts to YOU, our fans.

This month was devoted to Disney Cruise Line (DCL), and our first voyage was aboard the brand new Disney Dream. Special Guest blogger Carol Beth Scott discussed the engineering of the Dream‘s on-ship water coaster (the only one in the world!), the AquaDuck. Did you know a team of naval architects and safety engineers used wave studies and computer models to determine how much ocean waves would affect the fluid dynamics of the ride while it sails?

We stopped at Disney’s privately owned port of call, Castaway Cay in the Bahamas. The breathtaking beauty of the island’s pristine sand and turquoise waters may be enough to satisfy some travelers, but others may want to take advantage of the many island amenities.

With the observation of Abraham Lincoln’s birthday, I wondered if he had ever dipped his toes in the ocean. I figure maybe he had, since he had a patent issued to his name, U.S. Patent No. 6,469, for a hydraulic device used to lift ships over shoals. As we learned of Walt Disney’s and Abe Lincoln’s similarities, we learned some presidential trivia. 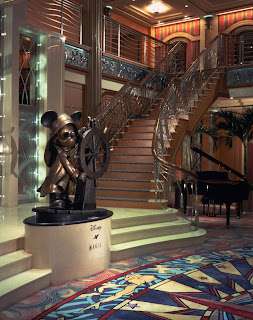 About the same time  the Dream launched, the Disney Wonder headed West, setting off on its own new adventure. Journeying up and down the Pacific coast, the Wonder will make DCL history by venturing for the first time to Alaska.

First in the Disney Cruise Line fleet was the Disney Magic. Setting sail with the Magic in July 1998 was a new venture for the Walt Disney Company, but the ship itself brought a magic of its own to the entire cruise industry. Today’s Takeaway looks at design inspirations reminiscent of an opulent early 20th century predecessor, the RMS Titanic and dives into the research of Expedition Titanic.

Conservation efforts are born of necessity on cruise ships, as both space and resources are limited. The Disney Cruise Line (DCL), however, not only takes required steps to assure environmental responsibility, but also paves the way with many innovative initiatives. See what DCL does and learn how your kids can participate in Disney’s Planet Challenge.

We wrapped up the month looking at some undersea adventures and talking turtle Crush, Dory and the gang from Finding Nemo. We offered several Takeaways including a flashback to a post from one year ago: The Seas with Nemo and Friends.

TOMORROW, a new Earn Your EARS assignment goes out. Don’t forget to register if you haven’t already!

Thursday begins a month at Disneyland Resort and Disney’s California Adventure Park, and on Friday, we will make our first journey aboard the Magical Blogorail Yellow loop. The following week we will once again join the Dismarks Disney blog carnival.

We hope you are having fun learning while you play, and we’re glad to have you on our roll!