Hong Kong Disneyland in China opened in September of 2005. A relatively small Park in comparison to its counterparts, the Resort is a popular destination for tourists and locals alike. Laid out in the traditional wheel-and-spoke design and encircled by a train track, Hong Kong Disneyland consists of fewer Lands than other Parks. It does not lack Disney magic, though. Fantasy, adventure, space, Americana…rides, Characters, shows, and fine dining…it’s all here!

There’s a definite familiarity to Hong Kong Disneyland for Guests who have visited other Disney Parks. They will immediately recognize common features along Main Street, U.S.A., such as the Disneyland Railroad, City Hall, and vintage early twentieth century vehicles. However, some special features appear here as well, especially around Halloween.

The Main Street Haunted Hotel is reminiscent of Disneyland’s Haunted Mansion. The bride ghost of Victoria Maxwell roams its halls in search of new victims, while after sundown, a Ghostly Gathering of ghouls and zombies throw a dance party in the street. Nightmare in the Sky nighttime fireworks spectacular flashes eerie colors overhead as the evil Maleficent casts a spell over Sleeping Beauty Castle, enveloping it with thorns, ghosts, spiders, and pyrotechnics.

Even venturing into Fantasyland, the familiar takes on new twists. For instance, the it’s a small world attraction, which opened in April of 2008, might look the same on the outside, but inside Guests board “the happiest cruise that ever sailed.” What makes Hong Kong Disneyland’s version different? Even though Walt Disney himself helped create the original it’s a small world attraction, and despite the fact that this attraction has been added to every Disney Park around the world, the Hong Kong version is the only one to feature Disney Characters. In fact, 38 of the 460 toys and Audio-animatronic figures are Disney Characters. Sail aboard and you’ll be happy to discover Ariel, Lilo and Stitch, Woody and Jessie, Pocahontas, Mulan, and more amid the international scenes.

Also unique to Hong Kong’s it’s a small world is the particular assortment of languages heard singing the theme song. It is translated into nine languages, four of which are exclusive to Hong Kong Disneyland (Cantonese, Pu tong hua (Mandarin Chinese), Tagalog (Filipino), and Korean) and are sung by a choir of 16 children. The other five languages are English, Japanese, Italian, Spanish, and Swedish. Hear the song in each of the nine languages here. Four top Asian recording artists (Nikki Gil from the Philippines, TWO from Thailand, Miriam Yeung from Hong Kong, and Michael Wong from Malaysia) came together to celebrate the attraction’s Grand Opening and produced a music video of their vocal collaboration.

Tarzan’s Treehouse is the focal point of Adventureland. This arborial island home is accessible only by log raft and offers fantastic views of the entire Park. The waterway surrounding it is full of Audio-animatronic jungle animals. It’s a nice way to relax, especially if you’ve been to the Tribal Burial Grounds or Demon Forest! While in Adventureland, don’t miss The Festival of the Lion King, a highly-acclaimed stage adaptation of the 1994 animated feature film, The Lion King. 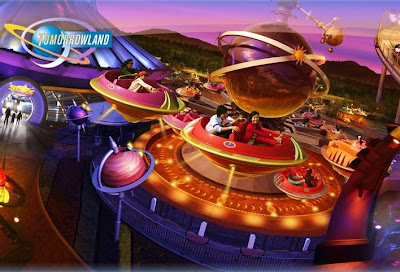 In Tomorrowland, explore space on an indoor rollercoaster, battle aliens with Buzz Lightyear, interact with Stitch, or take a spin around Autopia. At Hong Kong, Space Mountain has been modified for even more thrills. On Space Mountain – Ghost Galaxy “ghoulish monstrosities and scary apparitions lurk around unsuspecting twists,” exciting Guests on this dark ride. Not-so-scary adventures abound at the Stitch Encounter. This interactive presentation is similar to Turtle Talk with Crush at Walt Disney World’s Epcot. Here, everyone’s favorite alien interacts with Guests in his hilarious, mischievous way.

Hong Kong Disneyland is all spooked up during the Halloween season. For about $250, Guests can stop by the Boo-tique in Tomorrowland and have makeup artists bring out their wickedness!

Make homemade face paint and create wigs from yarn or fabric scraps to create your own frightful look (or not-so-frightful if you prefer!).

In a small bowl, mix together all ingredients BUT food coloring until well blended. Add one drop of food coloring at a time until you reach the desired hue. Repeat process above for each color and apply to children’s faces with a clean paintbrush or makeup applicator.

What you’ll need to make wigs:
various colors of yarn OR
strips of clean cloth or rags
hot glue gun (you can use Elmer’s, but it will take longer to dry)
chenille craft sticks (also known as pipe cleaners), ribbons, or hair clips
a paper plate

Cut strips of yarn or cloth to desired wig length. Glue to backside of paper plate, completely covering plate, and allow glue to dry. Be generous with yarn/cloth strips so the wig is good and fluffy! When dry, punch a hole near one edge of the paper plate and a second hole directly across from that one. Tie a string of yarn through the holes and fasten under child’s chin to secure wig to head. Use craft sticks, ribbons, or hair clips to style “hair.”